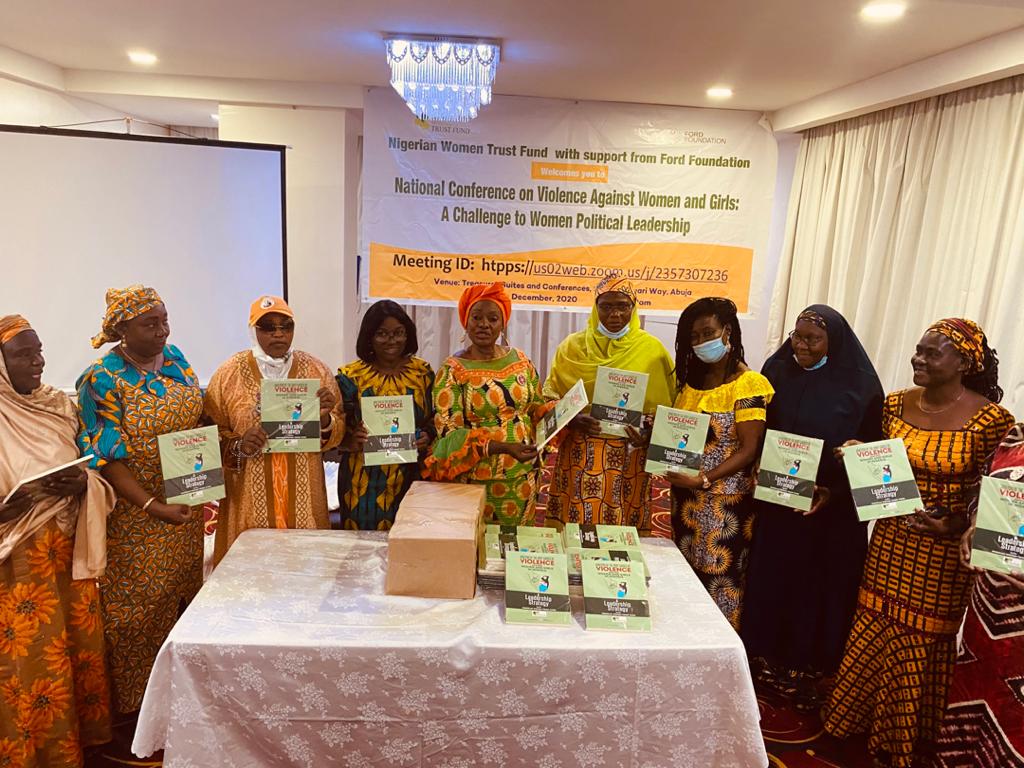 04 Oct Research Work: Analysis of Root Causes of Violence Against Women and Girls

At the National Conference on Violence Against Women and Girls: A Challenge to Women’s Political Leadership organized by the Nigerian Women Trust Fund with Support from Ford Foundation on 8th December 2020 in Abuja and virtually with participants from diverse background, the honourable Minister of Women Affairs unveiled and publicly presented a publication by the Nigerian Women Trust Fund titled Analysis of the Root Causes of Violence against Women and girls: A Leadership Strategy. During the presentation, the Minister condemned in strong terms all acts of violence against women and girls. She emphasized that violence against women and girls is an abnormality that reduces the opportunities for women and girls. She called on all stakeholders to act swiftly to guarantee protection of women and girls from all forms of violence.

The conference which was also organized to commemorate the Sixteen Days of Activism against Gender-Based Violence under the global theme, “Orange the World: Fund, Respond, Prevent, collect!” provided the platform for the Ending Violence against Women and Girls Project (EVAWG), who participated at the conference to share their experiences.

During the book unveiling session, moderated by Ms Toun Okewale Sonaiya, MD/CEO of Women Radio, 97. 1 FM, the Honorable Minister Dame Tallen commended the Nigerian Women Trust Fund and the Ford Foundation for the collaboration on the publication and tasked the two organizations to extend the research to every state of Nigeria. She congratulated the Nigerian Women Trust Fund for its efforts towards the empowerment of women and girls for leadership positions.

The conference which was also organized to commemorate the Sixteen Days of Activism against Gender-Based Violence under the global theme, “Orange the World: Fund, Respond, Prevent, collect!” provided the platform for the Ending Violence against Women and Girls Project (EVAWG), who participated at the conference to share their experiences.

The conference assembled female politicians, Civil Society Organizations (CSOs), NWTF mentees, Academicians, and relevant stakeholders who contributed to the discourse. Ms Mufuliat Fijabi the Chief Executive Officer, Nigerian Women Trust Fund gave the welcoming remark highlighting the changes women politicians encounter as a result of violence and urged female politicians to stay resolute in ensuring that women are duly represented in our political space. Ms Boladele Shobowale – Program Assistant, Ford Foundation gave the Goodwill Message stating that across the world we have seen that women have demonstrated exemplary leadership at every level of the pandemic response. However, the pandemic has also exacerbated deeply entrench inequalities threatening progress on gender equality and poses significant barriers to women’s participation in leadership and Nigerians governance. Adding that, Nigeria has one of lowest women representation in the world and in Africa. Nigeria is ranked 181 out of 193 countries in this regard.

This is evident in our National Assembly where only 7 seats are occupied by women out of 109 senate seats and only 11 seats out of 360 seats for the House of Representatives. She reiterated that women have made remarkable progress in various fields, but politics has not been one of them. Ms Dorothy Njemanze – Activist, and co-founder of Dorothy Njemanze Foundation gave the Agenda Setting Statement on Violence Against Women and Girls: A Leadership Barrier. In her speech she emphasized that one of the things important about participation in society for adult is participation in elections and other leadership roles which may not come by elections adding that, it is important to look holistically at what violence against women and girls is all about and the culture of addressing violence against women and girls, response protocols towards addressing violence against women and girls as reported.

At the conference Her Excellency, Dame Pauline Talen (OFR) – Minister of Women Affairs unveiled and presented the research publication titled “Analysis of the Root Causes of Violence Against Women and Girls in Nigeria: A Leadership Strategy” which was moderated by Ms. Toun Okewale Sonaiya – Chief Executive Officer, Women Radio 91.7fm 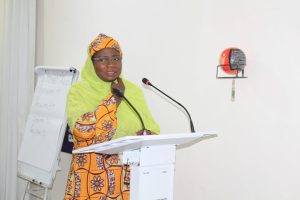 Harnessing the aftermath of the conference by Ms. Felicia Onibon – The National Coordinator, 100 Women Lobby Group noted that the meaningful participation of women in national, local, and community leadership roles has become an important focus on global development policy. Still, some may ask why it matters if women become political leaders, elected policymakers, or civil society activists. Why does the world need more women involved in all aspects of the political process? Ms Onibon summed that women’s political participation results in tangible gains for democracy, including greater responsiveness to citizen needs, increased cooperation across party and ethnic lines, and a more sustainable future.

Epilepsy Safe Mode
Dampens color and removes blinks
This mode enables people with epilepsy to use the website safely by eliminating the risk of seizures that result from flashing or blinking animations and risky color combinations.
Visually Impaired Mode
Improves website's visuals
This mode adjusts the website for the convenience of users with visual impairments such as Degrading Eyesight, Tunnel Vision, Cataract, Glaucoma, and others.
Cognitive Disability Mode
Helps to focus on specific content
This mode provides different assistive options to help users with cognitive impairments such as Dyslexia, Autism, CVA, and others, to focus on the essential elements of the website more easily.
ADHD Friendly Mode
Reduces distractions and improve focus
This mode helps users with ADHD and Neurodevelopmental disorders to read, browse, and focus on the main website elements more easily while significantly reducing distractions.
Blindness Mode
Allows using the site with your screen-reader
This mode configures the website to be compatible with screen-readers such as JAWS, NVDA, VoiceOver, and TalkBack. A screen-reader is software for blind users that is installed on a computer and smartphone, and websites must be compatible with it.

We firmly believe that the internet should be available and accessible to anyone, and are committed to providing a website that is accessible to the widest possible audience, regardless of circumstance and ability.

To fulfill this, we aim to adhere as strictly as possible to the World Wide Web Consortium’s (W3C) Web Content Accessibility Guidelines 2.1 (WCAG 2.1) at the AA level. These guidelines explain how to make web content accessible to people with a wide array of disabilities. Complying with those guidelines helps us ensure that the website is accessible to all people: blind people, people with motor impairments, visual impairment, cognitive disabilities, and more.

This website utilizes various technologies that are meant to make it as accessible as possible at all times. We utilize an accessibility interface that allows persons with specific disabilities to adjust the website’s UI (user interface) and design it to their personal needs.

Additionally, the website utilizes an AI-based application that runs in the background and optimizes its accessibility level constantly. This application remediates the website’s HTML, adapts Its functionality and behavior for screen-readers used by the blind users, and for keyboard functions used by individuals with motor impairments.

If you’ve found a malfunction or have ideas for improvement, we’ll be happy to hear from you. You can reach out to the website’s operators by using the following email

Our website implements the ARIA attributes (Accessible Rich Internet Applications) technique, alongside various different behavioral changes, to ensure blind users visiting with screen-readers are able to read, comprehend, and enjoy the website’s functions. As soon as a user with a screen-reader enters your site, they immediately receive a prompt to enter the Screen-Reader Profile so they can browse and operate your site effectively. Here’s how our website covers some of the most important screen-reader requirements, alongside console screenshots of code examples:

We aim to support the widest array of browsers and assistive technologies as possible, so our users can choose the best fitting tools for them, with as few limitations as possible. Therefore, we have worked very hard to be able to support all major systems that comprise over 95% of the user market share including Google Chrome, Mozilla Firefox, Apple Safari, Opera and Microsoft Edge, JAWS and NVDA (screen readers), both for Windows and for MAC users.

Despite our very best efforts to allow anybody to adjust the website to their needs, there may still be pages or sections that are not fully accessible, are in the process of becoming accessible, or are lacking an adequate technological solution to make them accessible. Still, we are continually improving our accessibility, adding, updating and improving its options and features, and developing and adopting new technologies. All this is meant to reach the optimal level of accessibility, following technological advancements. For any assistance, please reach out to